Hash-brown Casserole! It’s an oldie, but a goooody.  My mother-in-law gave me this recipe when Doug and I were first married, and it has been a family favorite ever since.

I was going to write about how our church had a Men and Boy’s BBQ on Saturday, and that I made this for my hubby to bring to the BBQ, but…

It didn’t happen.  I had planned on making it Saturday morning, but Doug beat me to the hash-browns.  He made us a fabulous breakfast with bacon, and eggs, and hash-browns!  Oh well. Good thing I had made hash-brown casserole a couple of weeks ago, and took pictures then! 🙂 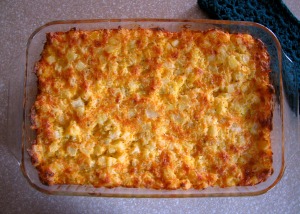 It’s quick and easy to put together.  Oh, and it’s super yummy! (Keep reading all the way to the bottom for a quicker microwave version.)

1 can cream of chicken soup

Salt and pepper to taste

1 cup crushed corn flakes (optional) (We don’t usually make ours with the corn flakes, but some people like them…)

Mix everything together in a big bowl. (Use the biggest bowl you have, trust me…) Spoon mixture into greased 9×13 baking dish and bake at 350° for 1 hr. 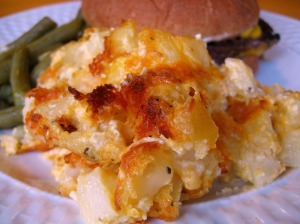 Are you hungry yet?

So savory, so cheesy, so gooood!

Okay, so, Sunday I made a roast, and you just have to have potatoes with a roast. Well, I didn’t have any potatoes.  Stink!  I did have a half a bag of hash-browns in the freezer, left over from Saturday’s breakfast.  So…

Salt and pepper to taste

Dump everything  into a small casserole dish.  Mix it up, and microwave it, with the lid on, for 5 minutes. Stir, and microwave for about 3 minutes longer, and done.

It was really good!  In fact, the microwave version was pretty close to the regular version of Hash-brown Casserole. Of course, nothing beats the brown crispy edges that you get when you bake it in the oven, but if you are in a pinch for time, this worked really well.  We were all pleased, and had potatoes with our roast, and that’s all that matters! 🙂

Give it a try sometime, and let me know what you think!

8 thoughts on “Hash-brown Casserole (plus a microwave version! Oh yeah!)” 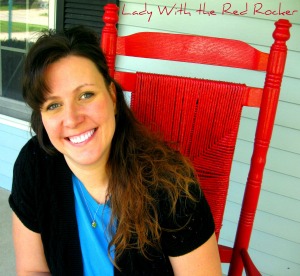 Hello, my name is Stephanie Hill, I’m the Lady with the Red Rocker on my porch...(Read more on the "About Me" page.)

I’ve Been Featured On…